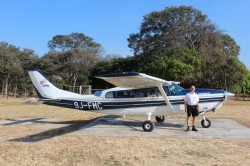 The 207 is equipped with a short take-off and landing kit for operating in and out of short grass/dirt airstrips. It is a versatile aircraft and can carry a combination of passengers and cargo.  It has been used for many different purposes and has carried a wide range of cargo, such as: dogs, 90 chickens, refrigerators, washing machines, kitchen sinks, counters, and even caskets.  It has double cargo doors and can accommodate 2 stretcher cases on medical flights.

The 207 has recently undergone renovations, such a new interior, instrument panel with some new and used avionics and finally a new paint job. 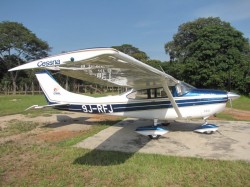 The 182 is equipped with a short take-off and landing kit for operating in and out of short grass/dirt airstrips.  This plane is suitable for smaller loads and fewer passengers and more economical.

After acquiring the plane in 2008, we have done a number of modifications including: